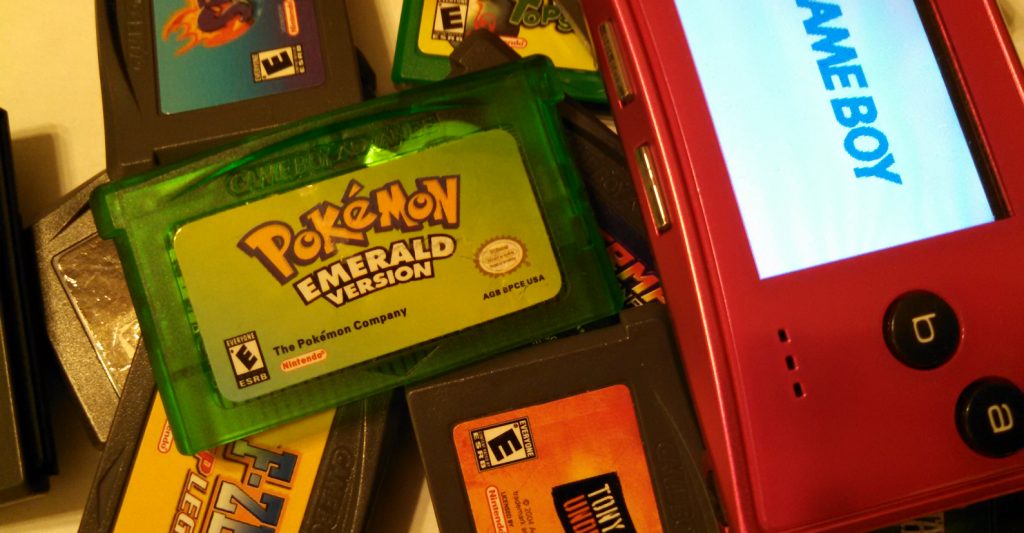 A day or two ago, I spotted an ad on twitter claiming to show me six tips for spotting a fake handbag on eBay. Because I’m really the sort of girl who gives a crap about designer handbags, right? Right. Since I would rather not show the ad in question on my own site, here’s my immediate response to the ad:

So at the request of Adam, here are 6 easy tips for spotting a fake GBA game on eBay.

To start, be wary of where you buy from. Whether you prefer eBay or Amazon for this sort of thing, pay very close attention to the seller’s use of language in the description and their location. If someone is offering a boxed, brand-new copy of Minish Cap for $40, it’s probably too good to be true. Having been through several bootleg games (as opposed to reproduction carts– that’s a different article altogether), I’ve noticed a few trends that plague the system.

Simply due to the nature of online listings, it’s usually best to buy a specific game from eBay than Amazon simply because there’s usually more pictures to dig through for the specific seller’s copy, rather than Amazon’s product listing. Yes, sellers can opt for their own pictures alongside their listing’s description, but it’s not nearly as common on that platform. Pay close attention to seller history as well. If the seller just started, it’s probably not a good sign. Lots of low ratings aren’t usually a good sign either.

The more popular the game, the higher the chances of running into a fake.

The biggest thing to look for before you get started is the listing’s images. If there is only one photo of the game, or worse, just a stock photo pulled from Wikipedia, be wary. What you want are clear, close up photos from different angles so you can examine the cart yourself before buying.

2. Take a Look At That Label

The label is usually the biggest giveaway for bootleg games. Often times, the paper is printed in a low quality and the image is poorly put together with MS Paint, or worse, is clearly a scan of the real thing. If you’re unsure about the artwork itself, Google yourself the image of the real cartridge and compare.

Check the logos and fonts as well. The Nintendo Seal of Quality on most bootlegs I’ve seen tends to be unclear, blurry, or off-centered. The golden ring surrounding the white oval is often misaligned, causing one side to be wider than the other. And yes, it’s supposed to be an oval, not a perfect circle.

The seal is present on a lot of classic Game Boy carts, and is always present on Game Boy Color and Game Boy Advance carts.

The ESRB logo also tends to be misshapen somehow, usually stretched or blurry or missing words. Compare the logo to that of an official cartridge to see what you find.

The Nintendo logo or printed word is often times in the wrong font or in the wrong shape. It’s squished down, the ring is too thin, it looks like Times New Roman rather than Nintendo’s custom font, or is left blurry as well.

The biggest thing to look for on your label, however, is the number printed on it.

On every official cartridge (except some special carts, like Yoshi’s Topsy-Turvy), a two digit number is mechanically pressed into the paper. This number is usually only visible in the correct lighting, or if it’s an old cart that’s collected enough dirt over the years to fill the indentation. Bootleg games almost never have this number, and even when they do, it’s printed in ink rather than pressed. When an official label is scanned and put on the fake cartridge, the numbers are usually printed in ink as well, as they show up from the light of the scanner.

3. Take A Look At That Cartridge

Often times, the plastic used to print the cartridge is printed out of a mold made by placing an official cartridge inside. As such, this softens the edges and makes the words “Game Boy Advance” shallow and sometimes illegible. This also applies to the printed patent info on the back panel, and the little indentation below the screw. The indentation is supposed to be deep and sometimes even glossy, but on the fakes, it tends to be shallow or flush.

The cartridges themselves tend to be discolored in some way, or made of a softer, weaker plastic than official ones.

The screw holding the shell of the cartridge is often an incorrect style as well. Sometimes it’ll be Phillips, sometimes it’ll be a triangle, or a star. Know that Nintendo’s official carts only ever used tri-wing screws on the GBA line. Sometimes bootleggers will get clever and pull the tri-wing screw from the donor cart, when applicable, but it can usually be clear when a cart’s been opened due to wear on the screw or complete stripping.

Sometimes the screw doesn’t even hold in place, and the cart will slide open on its own.

More than once I’ve run into a family-owned retro game store that’s had a prominently displayed fake cartridge. The printing of the logos is the same on all cartridges worldwide. In one particular instance, I found a supposed Japanese copy of Oracle of Seasons near Seattle. The printed label was from the Japanese version of the game, but the cartridge was a backwards-compatible black cart and instead of Nintendo Game Boy printed on top, it simply said GAME. The real version, as everyone should know, is only for the newer hardware and as such uses the standard clear plastic Game Boy Color cartridge.

Nintendo takes pride in the quality of the cartridges they print. So much so, in fact, that all official game cartridges across all of their systems have only been printed by them in Japan. Yes, even games that only released in one region. They want everything to be crisp and clean and properly built to not only stand the test of time and wear of use, but to show that they’re not a company that cuts corners.

Which is why you should always look at the pins on the PCB. Since the SNES, all Nintendo PCBs have been printed with several layers on the pins: copper as a base (usually), then nickle, and finally gold. NES carts are finished with copper at varying thicknesses placed over steel for durability. Gold, as a finishing layer, provides a strong current even after being worn down and is less prone to moisture damage. Gold is a standard for pins in modern technology, right down to common everyday SD cards.

When you look at the pins, check to make sure they’re gold. Sometimes it can be hard to tell just from an image but when lesser-quality metal layers are used, they tend to be darker. Copper is a darker metal by a fair margin and is really noticeable when placed side by side.

On one occasion, I bought a legit copy of Donkey Kong Land for the Game Boy and the seller said that he’d cleaned the pins thoroughly. I trusted him and popped the game in to find that audio flickered out and the sprites were faded and flicking with lines going through them. After a long an annoying email discussion, I found out he’d been scrubbing the gold off the pins of every game he owned with an abrasive brass polish. He swore up and down, having been in the military, that it was brass and I must not know what I was talking about. He completely ignored that he’d chipped it down to the bright silvery nickle and made the pins uneven in the process. I wish I still had that cart if only to use it as a PSA of how not to care for your games. Only use diluted rubbing alcohol to clean your pins, kids.

Bootleg carts also don’t tend to care about how pins are connected to the board. You’ll see that in these fake cartridges, pins are secured to the PCB at varying points through the pin itself, whereas on official boards, they are all secured at the top of the pin.

If you have the opportunity to look at the game’s connector slot, you’ll notice that right above the pins, printed on the PCB, is the Nintendo logo along with a copyright date and sometimes a product number. The way it’s printed varies from game to game, but the font used by Nintendo, and the logo used in various carts, is never printed strangely in official games. It’s a crisp white ink using Nintendo’s custom font and properly proportioned logo.

This goes back to the label problem that bootleggers seem to have. On a fake, the logo printed on the board will usually be misshapen, the text won’t be centered in the oval properly, and the line of the oval will be too thin in places. The font is usually wrong, too. And that’s if the bootleggers bothered to print anything at all.

6. The Point of No Return

So you’ve bought a game that you think looks legit. The label seems spot-on, it’s got a number pressed into it, the cart is of good quality, and the pins are attached properly. You pop that sucker in your GBA and you’re ready to go, only to be met with this screen right here:

The save data’s corrupt. Oh well, any number of things could have caused that so just start a new game. You play for a while and save and go back to it to find the same error message. You assume the battery’s dead and move along, but that’s when you start running into other problems.

It’s not rare to get a bootleg that’s playable up to a certain point, or even to the end. What is rare is for the data to save properly. The reason for this is that most GBA games, especially those made around or after 2003, use flash memory to save data. Certain games, like the generation three line of Pokemon games, used batteries for other functions such as keeping time on the internal clock. It needs a charge to keep the clock going, but the save data itself is safely saved to flash memory.

A lot of bootleg games don’t take that into account. They throw a (usually dead) battery on the board and hope for the best, without adding the little flash memory chip required to save the game. Sometimes the makers get clever and do install the chip, but it’s cheap and doesn’t hold a charge, it’s broken, or it’s not hooked up properly.

At this point all you can do is complain to the seller on your digital storefront of choice to have them deny it outright or even close up shop just to open another and avoid getting caught by the powers that be. Cut your loss kid, you just wasted $40.

But hopefully you never get that far because you heeded my earlier advice and gave that cart a figurative cavity search before wasting your hard-earned money. Sometimes spending a little extra for a copy is worth it to get the real thing. Believe me, I wasted at least $100 on several fake copies of Minish Cap online before I learned the tricks of the trade the hard way. I don’t want that to happen to any other collectors out there.

This seems to be less of a problem these days as demand has moved on, but it never hurts to be aware of some of the things you should look out for. Buyer beware, and happy hunting!