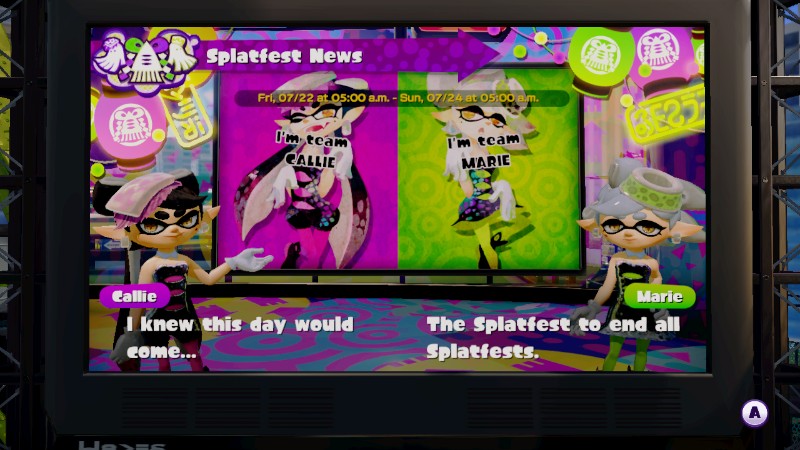 This weekend marked the final Splatfest in Nintendo’s surprise hit Splatoon for Wii U, with Nintendo thugs engaging in squid-on-squid gang warfare over which of the two Squid Sisters they like best. By the time the war was over, Marie had beaten her sister by a tight margin of twenty points, and hundreds of squids had senselessly lost their lives in the names of their false goddesses. And with the final Splatfest battle now over, the Wii U’s only killer app is gone and the install base has practically vanished overnight.

“Well, what’s the point?” James Johnson, an avid gamer and Splatoon player from Colorado explained when reached for comment. “Like, yeah, I guess the Wii U has like two other games worth playing, but without a shooter to vent my insatiable bloodlust against cartoon squids, I’ll have to move on to something like Call of Duty and shoot… people…” the 32 year old programmer finished with a shudder.

When we clarified that regular Turf War and Ranked Battles would still be supported by Nintendo for the time being, he doubled down on his decision to abandon the modern equivalent of the Dreamcast. “Callie is best Squid Sister and this loss, with no chance for revenge with future Splatfests, hurts me. I’ve been staying fresh for so long, and for what? To lose? So that THAT green bitch can claim the title of best Squid Sister? No. Fuck this rigged bullshit. Let me know when the sequel’s out.”

Marie supporters, on the other hand, seem to be content in their victory. We reached out to Jessica Farmer, a 29 year old veterinarian from California and die-hard Marie fan, for her take on the results.

“Marie deserves this victory,” she said, wearing a Marie screen-printed t-shirt she bought from a seller on Etsy. “She’s jaded, cynical, and has clearly seen some shit. She’s doing her nine-to-five gig with her sister just so she can get home and relax. She speaks to all of us.”

When asked if she’d continue playing Splatoon until the servers are inevitably shut down sometime in 2017, Farmer answered, “Oh hell no, that system’s a useless brick to me now. If I can’t rep my girl and shove her victory in some random guy’s face during that sweet Squid Sisters concert, it’s just another pointless shooting game. It’s all about that cred. And yes, before you ask, I’m Team Valor.”

We tried to reach out to several children who took part in the final event of the Wii U’s only game worth playing, but we couldn’t find a single Splatoon player under the age of 20. Every child we asked told us that they don’t play, quote, “baby games”. Instead, they said they only play the bloodiest M-rated shooters they can’t even obtain, at least not without negligent parents ignoring the rating system put in place specifically to keep such games out of the hands of children.

“Nintendo’s a baby’s toy! You have to like, move the controller around or something. And there’s no blood or gore at all,” reported 13 year old Kylie Thomas while casually slicing realistic humanoid monsters vertically in half with a chainsaw in the new DOOM title, without so much as a flinch. “REAL gamers only play hardcore shooters.”

GameStop, on the other hand, has reported record trade-ins– and perhaps record loss as they won’t be able to turn the useless systems around for a profit. When asked for comment on the assumed loss, the manager of one location told us, “don’t worry about it– we have this under control”.

We later saw one employee had been instructed by the manager to duct-tape two Wii U systems together and place a ‘Nintendo NX’ sticker on the newly bundled unit. The new unit will go on sale with The Legend of Zelda: Breath of the Wild on March 17th, 2017 for an MSRP of $249.99.