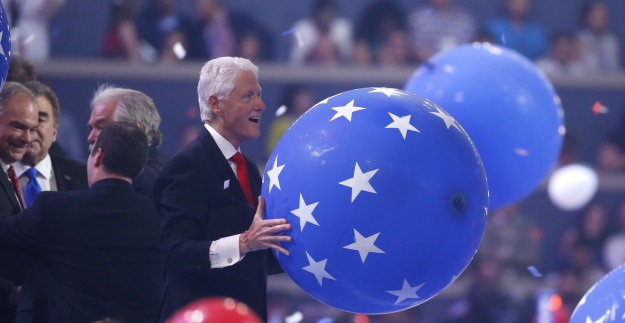 “Don’t tell him, it’s a surprise!” the official Presidential nominee of the Democratic National Convention told us in an exclusive interview after her nomination. The former Secretary of State was using the opportunity to pre-order Nintendo’s upcoming NES Classic Edition on her phone, presumably for her husband and former POTUS himself, Bill Clinton.

When asked why, the 68 year old grandmother of two responded, “I hear this ‘Nintendo’ thing is all the rage with millennials these days and there’s this one game about popping balloons that he’s sure to love. He’s always loved popping balloons, that Bill…” she trailed off with a smile, slipping into a happy memory of years past, and definitely not alluding to the condom that apparently broke while having sexual relations with Monica Lewinksi twenty years ago.

“I was browsing Buzzfeed, like you ‘Bernie Bros’ do these days to stay ‘in the know’ [she said, complete with air quotes for emphasis], and found this collection of pictures from the convention the other night and, well, just look how happy he is.” She then turned her phone to face our reporter, showing the saddest yet happiest looking former President we’ve ever seen. She then quickly snapped it back before we could take a closer look.

“With all we’ve been through in life, with all of our struggles, like the time we were dirt poor after leaving the White House in 2001, it really warms the cavity where my human heart used to be to see that childlike wonder on his face again. I’m so proud he decided to keep our granddaughter from experiencing that wonder too, and just kept it all for himself,” she continued, referring to the moment below where a gleeful off-camera Bill pulled his giant balloon away from the reaching hands of a child wishing only to experience the same fun as him.

“Bill’s getting on in his years and he’s not all there like he used to be,” the former First Lady went on, turning the conversation in a more somber direction. “I really want to give him a chance to experience that happiness on a daily basis until the Alzheimer’s sets in and I’m forced to poison him to prevent him from revealing any confidential information. I think this ‘Balloon Fighter‘ game might just be the greatest gift I’ve ever given him… aside from silencing his rape victim that one time, of course.”

The interview concluded when our reporter was asked to tell her readers to help keep Bill in the dark about his upcoming holiday surprise. So please, dear readers, let’s leave the surprise to Secret Service Santa, ok?

Balloon Fight, along with 29 other classic Nintendo Entertainment System games, will be available in a simple plug-and-play package this November.