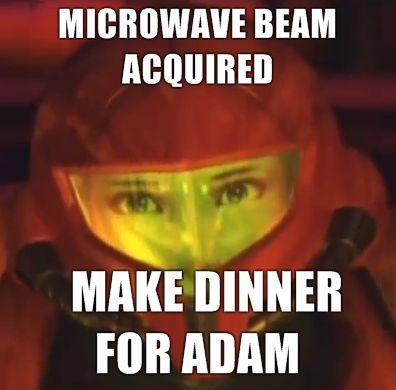 Note: This review is very… personal. Full of rage. And language. Consider it a satirical venting.

What started as a super-hyped action-over-exploration take on the Metroid series, after its first cutscene, quickly devolved into ruining everything that made Samus’ character special by turning her into the most cliche tropey girl with daddy issues ever and solidifying her Smash-inspired porn star look in the main game canon. Every aspect of progression revolves around her trying to earn the respect of the only daddy figure this space orphan has ever known, her commanding officer Adam. In doing so, she opts to follow his order of not using various weapons until he gives the clear, which puts her in mortal danger over and over. You know those missiles you just now let me use after beating that boss? THEY WOULDA BEEN REALLY FUCKING HELPFUL WITH THE BOSS, ASSHOLE. It’s as if Adam WANTS her to die a slow, painful, and easily preventable death. From another perspective, that’s an interesting take on the story. I can’t wait for the fanfics to delve into that idea.

There’s no physical hindrance this time; no suit malfunction- just the rebel bounty hunter badass we’ve come to know for 25 years wanting senpai to notice her. Every time he’s about to notice her, he pushes his glasses up the bridge of his nose, light reflecting in such a way that you cannot see his eyes. Samus then turns, running away, screaming ‘BAKA!’ at the top of her lungs. She forgives him though and follows his orders with wide eyes and a bright smile because just wants him to say he’s proud of her. Kind of like in Metroid Fusion, but fifty times worse.

The game doesn’t address the whole part of her lore regarding the Chozo and seems to have been completely skipped despite showing the destruction of the space colony she’s from, and shows one delightful cutscene where she literally turns into a weeping child at the sight of Ridley despite having fought him a half-dozen times already at this point in the story. Now we know why there’s new Ridleys in every game after she kills them in the last game! Great! But to turn her into a crying child at the sight of him? Seriously? She’s never flinched before. Why now?

Then there’s the gameplay which, while being the best Mega Man X game since X5 (a point which I will fight for to the death), fails on the ‘Metroid‘ front. Entirely gone is any sense of exploration, and not even in a ‘subtle’ way like in Metroid Fusion- it’s just up and gone. Straight narrow hallways. A to B. Long gone is that lonesome feeling of desperation, no clue where your next save point is, like in every good Metroid before it. Here we have the whiney porn star crying for Daddy Malkovich while running in platform heels that really highlight her blue skin by making her ass nice and perky and her bigger-than-ever chest lean forward as if she’s begging the world to notice.

This game turned our beloved badass bounty hunter into the drug-addled hooker who turned to street work because daddy never loved her and now she obsesses over THE BABY because her life on the streets and in the arms of strange men every night has forced her to abort time and again. Unable to cope with the loss, she envisions herself as a hero trying to save a space station that sent her a distress signal, but facets of reality have bled through and by the end, while she’s still living in her little fantasy world, she seems to have come to terms with the fact that daddy never loved her, so she runs. She runs to find another mission; another way to prove her worth to the world. Whether it’s hunting Metroids deep in the recesses of her psyche every night while she’s being mindlessly plowed by strange older men paying top dollar, or if she’s lying to her therapist about letting the one baby go to protect herself against her abusive Mother who she believed wanted to turn her potential children against her, she is Samus Aran. And that’s why this game has the best cutscenes ever.

Final thoughts: Metroid: Other M is a fun video game with exciting gameplay featuring delightful OCD triggers that make you want to run around the entire map backtracking in order to find every pointless item upgrade. The cutscenes themselves really show the hidden power of the Wii and graphically, it’s fairly nice to look at. It’s a must-play for every Mega Man fan and every game critic out there. Unlike Metroid games in the past, this title is not for people who think highly of women, especially Samus Aran. If you do, it will make you cry.