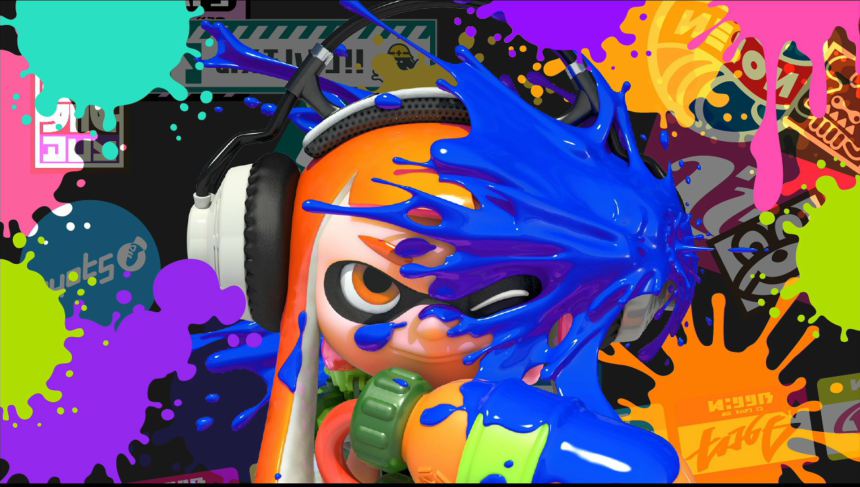 Remember the 90s? For a majority of people who might be reading this, you probably lived through the 90s as one of the internet’s fabled ’90s kids’ like I did. Remember slap bracelets, Tamagachi, and Nickelodeon Gak? Yeah, good times, good times. Remember GoldenEye? That game was the best, right? Screaming at the splitscreen with your best friends, everybody yelling at the one jerk who used proximity mines right by the spawn points and the other jerk who used Odd-job, forcing you to use the C up and down buttons more than you were used to. Nostalgic memories best left in the past, right? I don’t think Nintendo got the message. They looked at those Buzzfeed posts and thought, “hey why isn’t the Super Nintendo on this list? We did some cool stuff for 90s kids too!” Enter Splatoon, the most nostalgia-triggering game since Ducktales Remastered.

When we were first show a glimpse of what we’d later call Splatoon, many people didn’t know what to think. Is it a shooter like GoldenEye or is it a shooter more like Call of Duty? Is this Nintendo’s kiddy attempt at cashing in on the Call of Duty formula? What’s with all of the colors? But then as more information started to leak through the internet grapevine, people have become more and more intrigued by the idea. People who hadn’t touched a Nintendo console since the 64 or GameCube. People who see the kiddy splat-fest but are really starting to get into it despite those initial reservations. People who were those fabled 90s kids, now all grown up.

Over the past 24 hours, Nintendo’s held a ‘Global Testfire’ demo where, for a select three hours throughout the last day, everyone with a Wii U could hop into the fracas and see what this game’s really all about. Right away, the launch screen for the game revives memories of Nickelodeon gameshows where contestants would be coated in a nasty green slime. Something we all, at one point as kids, wished we could have done. The game’s splats not only hearken back to that neon hued visual bombardment a lot of us 90s kids suffered, but so does the music.

Throughout the demo, we’re treated to only a handful of songs, some of which feature a weird synthesized ‘voice’ instrument that was ever so popular in ads and pop songs of the early to mid 90s. The cartoon Doug even capitalized on this by making a lot of its music and sound effects with actual voice effects. From the minute the Splatoon demo was loaded, I was brought back to 1996 in all of its glory.

Remember Sketchers? Lisa Frank school supplies? Nintendo remembers. They remember how well compliment colors look with each other in neon form, so much so that every color combination of the teams in Splatoon was probably a no-tie shoelace color combo in 1996. When a match begins, 8 players are randomly split into two teams, each brandishing a randomly selected neon 90s color to splatter the world around you in. Neon green and neon pink, a cool dark blue against a very Nickelodeon logo orange. Not only are you living in a 90s kid fantasy, you’re sliming everyone around you like your favorite shows, from Double Dare to Figure It Out. And you’re doing it while rockin’ Sketchers-inspired kicks and blasting ink from your Super Soaker. Remember Super Soakers? Oh man, the nostalgia just keeps coming.

The music, color schemes, and item design aside, there’s even more here that makes me want to crank some Blink 182 while snacking on a bagel dog smothered in green ketchup and wash it all down with some Surge. So 90s.

The game’s presentation itself really reminds me of a combination of the ‘cool factor’ that was Tony Hawk’s Pro Skater, the bright areas and constant action making you want to get off your ass and do something outside like Tony Hawk and the show Rocket Power inspired us to do back then, and the game styles of the Dreamcast. Of all of the things that wrap up this very wet 90s induced dream, it’s gotta be SEGA’s final console. Many of the games for the system were experimental, highly creative, and original to the point that ‘wacky’ may come to mind (I’m looking at you, Sea Man).

It was this creativity that the Dreamcast became known for after its death, as a shining last hurrah of the creatively unique early 3D game design era that seemed to die with it. It was the wild west of gaming and nobody knew what they were doing, so they simply tried everything until something stuck and we, the players, benefited from that experimentation. When’s the last time you played a game like Chu Chu Rocket? When’s the last time a game like Chu Chu Rocket got a full retail release? In this sense, Splatoon feels a lot like Jet Grind Radio. Similar art direction, similar music direction, and the inklings themselves are branded to be hip and cool and anti-establishment, tagging their turf in their colors in time to come back and buy a new pair of Sketchers.

And that’s not even addressing the fact that the squid jumping mini-game that plays on the Gamepad while you wait for a match is basically the equivalent of a VMU minigame.

Combine the similarities in Dreamcast-era design with the neon colors, the Nickelodeon-style splatty menu art, the Sketchers, the Super Soakers, the abundance of slime, and the multiplayer shooting fun that hasn’t been seen on a Nintendo console since GoldenEye, and you have something that seems to draw together everything that Buzzfeed plays on when they try to make us feel nostalgic and old. Everything that was so good about being a 90s kid. Combine that with the Testfire times being on Friday night and Saturday morning and it almost makes you feel like a kid again, having a sleepover with your friend and playing GoldenEye until the Saturday morning cartoons begin.

Splatoon, as far as its gameplay goes, may not be that original– it really is just an ink-themed generic shooter with one character to play as, but what it lacks in originality there, it makes up for in style and streamlining with everything it does. The simplistic art style is bright and vibrant, being very welcoming to players of all ages, not just kids. The turf wars mode, which requires teams to cover the most ground in their ink color as possible, draws the focus away from just being a simple capture the flag mode or team deathmatch mode like so many other shooters have done before, and yet it feels like I’ve experienced this exact thing before and can’t seem to place where.

And that’s because it represents everything that made being a 90s kid so awesome. Playing with Gak with your friends at school, battling your Pokemon with a link cable, running around the park in Summer with Super Soakers, rockin’ the coolest pair of Sketchers or LA Lights your mom would buy you, and covering everything with neon-colored stickers. It doesn’t just remind you of being a 90s kid, it makes you feel like a kid again.