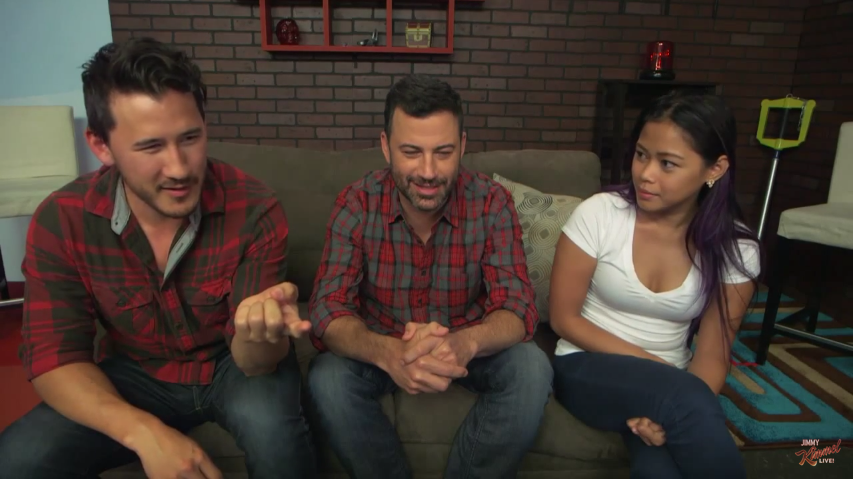 Last week on August 26th, YouTube launched its new streaming platform, YouTube Gaming, with the hopes of competing with the likes of Twitch. Rumors flew around a year ago about Google possibly acquiring Twitch and, looking at YouTube’s ongoing controversies over copyright claims, many people got really, really scared of what that would mean for them. That buyout never came to be thanks to antitrust concerns and Amazon ended up making the deal. The end result of all of this was YouTube creating direct competition, which just launched publicly.

With such a massive site as YouTube launching the new platform, many otherwise uninitiated people have taken notice of game streaming and Let’s Plays for the first time. This included late night talk show host Jimmy Kimmel who decided to poke a little fun at what, to him, is the completely absurd idea of watching someone else play a video game.

The sketch takes the idea to the next comedic level by exaggerating the punchline to make it seem more ridiculous a concept as it goes on, and Kimmel laughs along with the whole thing in jest, playing on the crowd’s shared misconceptions of what streaming must be. Typical comedy routine: play on the lowest common denominator for the biggest reach.

That’s all fine and well, if a bit purposefully ignorant, but it’s a late night comedian poking fun at a concept that, at face value like that, anybody would find a little strange. What happened next, however, just proved how little some of us can take a joke and how quick we are to attack anyone who says something even remotely bad about gaming culture in a post-2014 Internet gaming world:

He mentions several threats in the segment, doubling the length of his the original segment just by picking out some of the hurtful things people have said and showing them on air. He even mentions death threats to his wife and daughter, a level of harassment typically reserved for female and feminist game journalists, developers, and critics.

This sort of anonymous harassment isn’t new, and certainly wasn’t new when it began targeting women in gaming, but with the status of harassment in gaming coming to the forefront over the last couple of years, especially since last August, it now seems to be the default go-to reaction when anyone even insinuates gaming is bad in any way.

In a lot of ways, this knee-jerk reaction from a very vocal (if minority) segment within the online gaming community just reinforces pre-conceived notions in people not familiar with gaming culture about us all being childish for playing video games into adulthood, and shows even further reason why people unfamiliar with our culture should never bother giving gaming, or in this case streaming, a chance. If someone’s only exposure to something is this sort of toxic vitriol, it’s only going to push them away and dislike it even more.

Many of the nicer but still disapproving comments Kimmel reads off make the comparison to watching traditional sports on TV, which he agreed with in a sense but then made the erroneous comparison of streaming to “watching people play fantasy football. It is one more step removed from human activity”. What he fails to understand with that comparison only serves to drive in the main point of his original sketch: we should be spending time doing something more interactive than watching someone ELSE play a game. We should play it ourselves. Play it with friends. Or go play outside, as he suggests at a later point. Not an unreasonable conclusion for someone unfamiliar with the joys of streaming to come to and suggest.

He ends the video by admitting he may have jumped to conclusions but not apologizing for his jest, and in an effort to clear the air and take some heat off him, he asks people to reach out and show him why it can be fun to watch these things. Quickly enough, he finds two wonderful examples of the streaming and Let’s Play community to help him see why it might be a thing people would like to do.

Markiplier and MissesMae took the bait and together, the three of them have an uncomfortable play session with Rocket League where Kimmel takes a different approach that is also common of comedians when they talk of game or Internet culture. He admits that he’s a little older, and very out of touch with this sort of thing, but also doesn’t really get the answers he’s looking for.

He starts off asking why his sketch garnered such a violent reaction from people. You can see in his eyes in the two latter videos just how shocked he was to be getting such threats from people for what was to him, and really to most people, just a simple comedy bit. Mark explains that the reaction is more from people wanting him to understand better, and later explains that it’s fun to be sharing the fun of a game together, even if by proxy rather than in person. With a comment from MissesMae that he read off, her initial reaction when she recognized her own words was that of embarrassment for being called out, but she quickly gathers herself and takes the defensive with “yeah, why attack it?” and goes on to explain that she felt insulted by the bit. Kimmel defends it by saying it’s a comedy show.

And that’s really what this is about: it was a comedy bit boiling down the base concept of streaming for the sake of a joke that would resonate with other ‘out of touch’ people (read: basically anyone who isn’t familiar with Internet gaming culture, let alone streaming or gaming as a whole). The fact that MissesMae stood by her statement, adding that she even felt insulted, is reflective of how sensitive the culture is now and how quick we are to be offended by what was clearly meant in harmless jest. Anything said by a perceived ‘non-gamer’ that shows the slightest hint of criticism, even if it’s meant as a throw-away joke on a late night comedy program, is met with such a harsh reaction by people who interpret it as a personal attack.

That’s not to say we as gamers need to develop tougher skin, but the controversy surrounding Jimmy Kimmel right now is completely uncalled for and makes us look bad as a whole. It’s a vocal minority, yes, but are we so wrapped up in our own world to be that upset by a harmless sketch? Yes, it’s off base. Yes, it missed the point of streaming for those of us who do it and watch it and like it. Yes, it was ill-informed. But at the end of the day, he’s a television comedian poking fun at a concept that on the surface seems ridiculous to the non-gamer. What we tend to forget is that the majority of the world isn’t aware of or part of our culture. What we tend to forget is not everyone sees things from our perspective. We also tend to forget that we can’t (and shouldn’t try to) force them to.

He might even be a gamer in his free time, but he obviously doesn’t spend time online in gaming communities. He doesn’t watch Markiplier scream at Five Nights at Freddy’s. He doesn’t watch Cosmo break Ocarina of Time in half. He doesn’t spend hours laughing at Arin Hanson fail to understand how Sonic Adventure works. He is a comedian in the world of television, pop culture, and his own hobbies, and made a joke about a concept that many people even within gaming find silly (remember when Nintendo said they don’t have a Twitch app on Wii U because watching other people play games isn’t fun?).

Is that really worth threatening the lives of his wife and daughter? Why does such a large vocal supposed-minority feel the need to do this every time someone says something even remotely wrong? What does the harassment over this accomplish? He’s not going to stop talking about video game stuff when it becomes topical. He’s not going to stop his show because people felt attacked and insulted by a very innocent one-dimensional joke. It wasn’t some super controversial statement he needs to be held accountable for. It was a simple comment on a current event, told from his perspective. He even admitted over and over he didn’t understand it. It was so trivial a gag, it’s not even something he should have to apologize for. But thanks to the Internet’s now-typical overreaction to anything wrong about gaming, it’s only serving to paint us in an even more unfavorable light amongst non-gamers.

I’m a streamer and I post my streams to YouTube for people to watch later. Of course the sketch was off-base and just a tad condescending to our community. But was I insulted by it? Was it even worthy of insult? Not in the slightest. It was as harmless as any other late night comedian poking fun at whatever other topical event was happening that day. And it was certainly undeserving of the reaction it got.